Dungeness - cool, sunny, w 5 - Another blustery day with the wind only relenting late in the afternoon. A seawatch from outside the hide was largely uneventful due to a big sea running with large waves crashing onto the beach and spume flying around, but did deliver a cracking juvenile Pomarine Skua that cut in close to shore as it harried Black-headed Gulls before disappearing into Rye Bay. Otherwise it was a case of distant Gannets, several Arctic Skuas and Red-throated Divers and hundreds of coasting Goldfinch and Linnet flocks, plus a few Meadow Pipits, Siskins and Skylarks over. On the land a Black Redstart along the power station wall and a Peregrine on A station were the only birds of note. 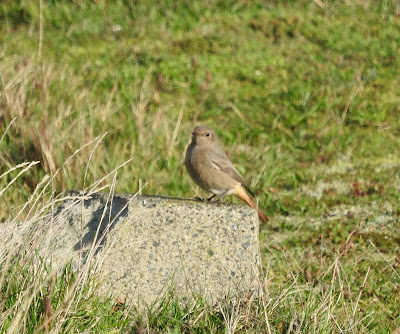 Moving onto the bird reserve and on ARC two Glossy Ibis (four were reported later on the Boulderwall/Dengemarsh fields) flew in to join a Great White Egret and a flock of common dabbling ducks. In the bushes down to the pines several Blackbirds, Robins, Chiffchaffs and a Green Woodpecker. A wind-swept Burrowes was largely devoid of birds apart from the usual ducks, a Pintail, Cormorants, a few Lapwings, a Bar-tailed Godwit and a Raven over. Around the circular trail we had  good views of Marsh Harrier, plus Bearded Tit, Kingfisher, Cetti`s Warbler, Reed Bunting, Snipe and three southbound Swallows. At Scotney two Brent Geese were on the front fields along with the usual feral geese until everything was flushed by three dogs. We finished the day at a harrier roost where two birds came into the reedbed, plus two each of Buzzard and Kestrel nearby.