Lade - mild, damp, sw 4 - For most of this Lockdown week we haven`t strayed too far from the local patch where wildfowl numbers have remained low on the lakes, but with the inclusion of a Goldeneye on north lake. A Great White Egret paid a visit on Monday and up to five Little Egrets came and went through the week. Marsh Harriers are regularly noted hereabouts when on Wednesday a sub-adult male was seen to grab a Weasel from one of the Desert ridges; the unfortunate mustalid appeared to put up quite a struggle and was dropped from height several times by the harrier before it was eventually dispatched. The commotion soon attracted the attention of another, much larger, immature bird which seemed to join in the spoils. No doubt about bird of the week though, which occurred yesterday morning when a Black Kite first appeared at Dungeness (thanks to DB and DW for the text and Whatsapp tip-off respectively) before moving onto the ARC and over the water tower, where I saw it from Lade south. It then crossed the airfield and onto Romney Salts (OL) before eventually being located by CP at the back of Marley Farm, St Mary`s Bay. A late record for Black Kite, a species that is currently extending its range across Europe and Russia, although there is also the possibility that it may have been a bird of the eastern race. Tuesday evening saw a passage of thrushes over the cottage, while numbers of finches and larks around dawn tailed off as the week progressed. Two Corn Buntings were noted this morning.

Elsewhere this week a couple of visits to Dungeness for seawatches resulted in the expected Gannets, Common Scoters, Guillemots, Razorbills, Sandwich Terns, Mediterranean Gulls, Kittiwakes and several Bonxies, but few Red-throated Divers and Brent Geese. During the week the regular seawatchers also reported passing Red-necked Grebe, Black-throated Diver, Velvet Scoter, Scaup and several Pomarine Skuas, and with an onshore southerly forecast for Saturday there may be one or two more surprises to come. On the bird reserve both Glossy Ibis and Cattle Egret are still present with the trails, car parks and loos now open from 0900-1700hrs, but all the hides and the VC closed. This afternoon a Long-tailed Duck was located on Scotney pits. Sunrises over the bay earlier on in the week have also been pretty spectacular. 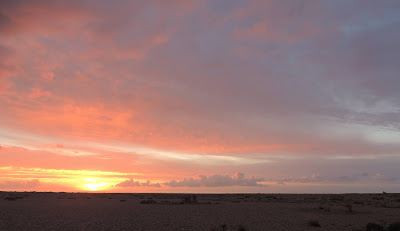