Waders on the bay

Lade - wet and windy, sw 5 - The foul weather continued with rain clearing by late morning, although it remains mild. Around the garden fir trees first thing were both Chiffchaff and Goldcrest, plus plenty of Goldfinches on the feeders, and Siskins, Redpolls and Grey Wagtail over. 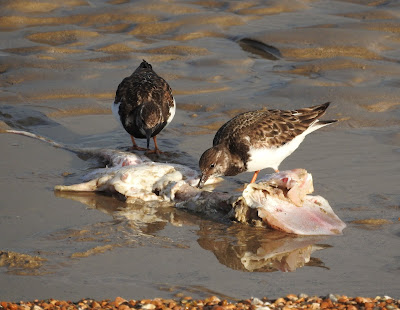 The sun broke through this afternoon with the wind eventually slackening off a little making for a fine, dry end to the day. A seawatch from the fishing boats at Dungeness with Clare and Peter produced a few Gannets, gulls and Sandwich Terns over a choppy sea, plus a Grey Seal and two small flocks of coasting Goldfinches. Moving onto Lade north where the highlights were three late Swallows hurrying south, in contrast to a recently arrived drake Goldeneye on the water and an inbound Jay. The bay produced the regulation 10 species of waders including 23 Grey Plovers, 18 Knots, three Redshanks and eight Ringed Plovers, plus 12 Sandwich Terns. We finished the day on the golf course where there was no sign of any Short-eared Owls, just three Stonechats, a Sparrowhawk and lots of dog-walkers.
Posted by Paul Trodd at 11:52