Weekly Summary - It has been a variable week of weather which has see-sawed between cold and frosty mornings and wet and windy conditions, courtesy of named Storm Barra that swept up from the south-west mid-week. The lanes around New Romney have been largely quiet and still bereft of winter thrushes, although I did hear a few Redwings passing over the village on Tuesday evening. I paid several visits to Lade this week checking the bay, foreshore and pits for any storm-blown waifs but without success. Four Black-tailed Godwits continue to winter on the sands along with hundreds of gulls and the usual ten species of waders including a few Ringed Plovers at last along the Littlestone stretch. The lakes attracted low numbers of wildfowl while Chiffchaff and Cetti`s Warbler were noted by the ponds. At Dungeness the sea produced the usual Gannets, auks, Kittiwakes and the occasional Red-throated Diver feeding offshore or fizzing around the point. 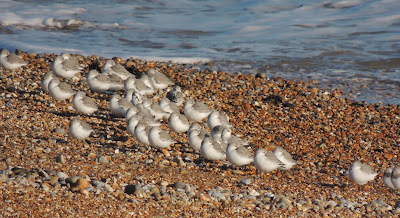 On the bird reserve both Glossy Ibises (per MC) are still present around Dengemarsh (one flew over Cook`s Pool today) and the usual array of Caspian and Yellow-legged Gulls have kept the ID gurus entertained on Burrowes, where a few Shelduck, Pintail and Goldeneye can be found lurking amongst the commoner ducks. Great White Egrets and Marsh Harriers are a given and a flooded paddock field along the Lydd Road this morning attracted 100 Common and Black-headed Gulls, four Cattle and three Little Egrets. Out on Walland Marsh up to 18 Bewick`s and six Whooper Swans are present on the more remote sections of farmland during daylight hours and roosting on nearby wetlands in the evening.