New Romney - mild, cloudy, W5 - We`ve entered that twilight zone between the two holiday periods, a sort of limbo in the calendar when you wake up wondering what day of the week it is, and whether or not you should be putting the bins out today or tomorrow. With family comings and goings I`ve managed to escape for walks around the Marsh and down to the coast at Greatstone; for the time being I`ve given up on the farmland north of the village, preferring the delights of the stinking dung heap on Romney Salts and adjacent stubble fields that have at least delivered a few Corn Buntings, Skylarks, Meadow Pipits and common raptors. Gull flocks have been checked on the industrial estate (that`s how desperate it is!) where a couple of Mediterranean Gulls loitered in amongst the riff-raff. Yesterday, with a brisk south-easterly forecast I joined MC in the sea watch hide for an hour first thing just before the rain set in. As expected there were hundreds of seabirds fizzing between the two bays, mostly gulls, Gannets, Cormorants, auks and Red-throated Divers, plus two Sanderlings, five Oystercatchers, Brent Goose and Common Scoter. I then moved onto Lade where it was similar fare to last weekend`s WeBS count, while the wet fields along Lydd Road held six Cattle and four Little Egrets. This morning en-route to Folkestone I paused at the Hythe sea defense blocks to look for Purple Sandpipers but all I could find were Turnstones clinging on for dear life in the rough sea conditions. 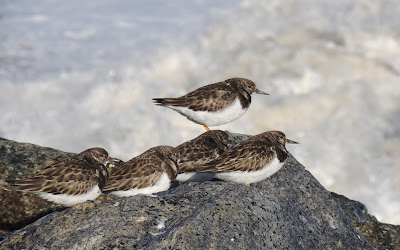