Dungeness - warm, dry and cloudy, NE 2 - Guiding today for a family from Wittersham commenced at the point where passerines were few and far between, but did include a few Yellow Wagtails over and a Grey Wagtail on the sewage pans in A station. A brief seawatch produced the usual distant Gannets and Sandwich Terns, plus 30 west-bound Common Scoters. 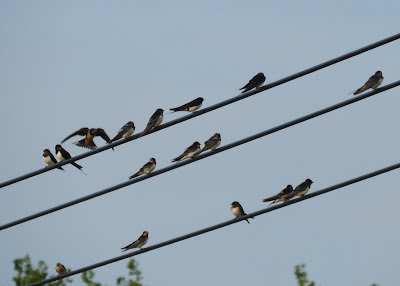 Thankfully there was much more to see on the bird reserve, particularly on the wader front with two Little Stints and a Wood Sandpiper the highlights from Hanson hide, along with three Great White Egrets, three Glossy Ibis, two Ruff, 15 Black-tailed Godwits, 10 Dunlins, five Ringed Plovers, two Snipe, a Common Sandpiper, 50 Lapwings and 80 Golden Plovers, while at least seven Cattle Egrets were in the Boulderwall fields. Dengemarsh, from the hide, yielded six juvenile Curlew Sandpipers, two Green Sandpipers, a Pectoral Sandpiper, a Greenshank, another Wood Sandpiper, a few more Black-wits and Snipe, three Great White Egrets and two Glossy Ibis. Also noted across the reserve, two Whinchats on the Return Trail, Willow and Reed Warblers, a Kingfisher, 10 Pintails and hundreds of Swallows and Sand Martins, while a Red-necked Phalarope dropped in on Burrowes this afternoon and a White-winged Black Tern from Springfield Bridge this evening (SM). We manged to rack up 80 species of birds for the guests today.