Warm, dry and cloudy, SW3 - The Tavern Viewpoint overlooking Lade Bay on a falling tide this morning was a wonderous sight with seabirds and waders aplenty. A tally of 1,100 Sandwich Terns, 100 Common Terns (at least two juv Arctics), 10 Little and three Black Terns settled on the sands was very much a minimum count as many more were fishing offshore. Over a thousand Oystercatchers and Curlews made up the majority of waders amongst 20 Dunlins, 10 Knot (DS) and a few Bar-tailed Godwits, Sanderlings, Ringed Plover and a Grey Plover. An Arctic Skua chased the terns along the tideline and the first six Shelducks of autumn were noted. 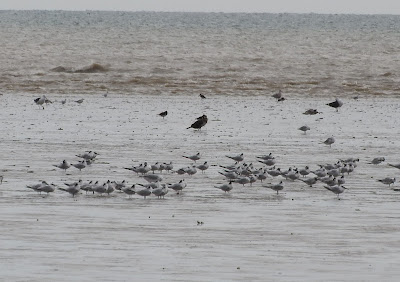 A few of the Sandwich Terns on the bay 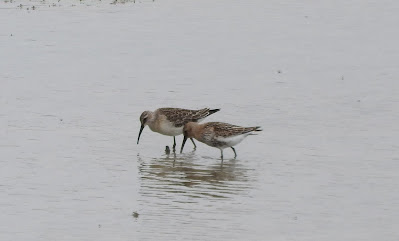 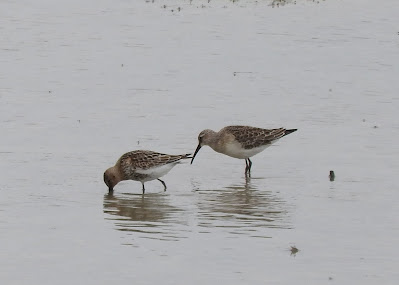 A check of Lade pits produced 11 Grey Herons amongst hundreds of Cormorants and feral Geese on the islands on south lake plus two Common and a Green Sandpiper. Notable waterfowl counts included 230 Mallards and 82 Great Crested Grebes across both waters. Kerton Road quarry delivered another Common Sandpiper but little else apart from 200 Canada Geese. Yet again ARC, from Hanson hide, had plenty to keep the wader enthusiast happy with close views of three Curlew Sandpipers, two Ruffs, Snipe, Dunlin and Black-tailed Godwits. 128 Golden Plovers were on the main island along with 50 Lapwings while further out there were more Dunlins, Common Sandpipers and Ringed Plovers, two Wood Sandpipers and a Little Stint.