Lade - mild, cloudy, wet, light airs, am, brighter later - Spent the first part of the morning on the local patch counting waterfowl for the monthly WeBS survey on south lake, until a phone call from PB told of a Pallas`s Warbler in the moat at Dungeness found by Ray O` Reilly whilst leading a KOS group. We were soon on site, but despite a couple of hours searching it could not be relocated, just several Goldcrests, a Firecrest, Song Thrush, Robins, Wrens, Chaffinches, Dunnocks and Blue Tits.
Whilst there news came through of a Stone Curlew on the beach at Greatstone found by David Scott whilst scanning roosting waders on the high tide - from his front window! The bird eventually moved down the beach towards the Pilot and landed just past the green fishing boat opposite Williamson Road, a stone`s throw from Plovers - in a desperate attempt to get it on the cottage list I tried to see it from the upstairs bedroom window, but failed! However, the bird had settled on a quiet section of the beach affording a clutch of local and visiting birders to observe it on the deck through scopes. A very late record and an odd place for one to turn up too, alongside roosting Oystercatchers. 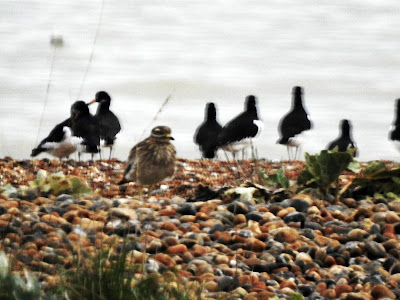 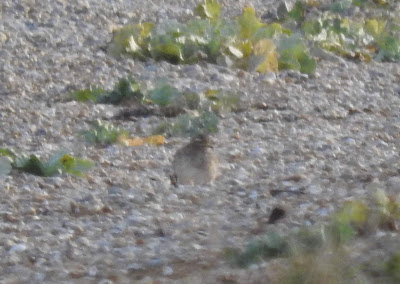 Record shot down the beach! 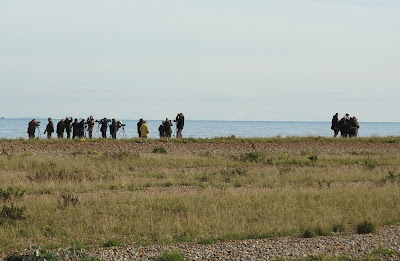 This afternoon on the way out to Walland with CP we stopped for seconds on the curlew before heading out on the marsh, where a scan of the bay revealed a Red-breasted Merganser, five Sandwich Terns and a number of Kittiwakes on a flat calm sea.
From our usual watch point on Walland a total of 18 Marsh Harriers dropped in to roost in perfect weather conditions. Also noted in the area, five Buzzards, four Kestrels, two Ravens, five Fieldfares, several Water Rails and Cetti`s Warblers, 10 Mipits, Corn Bunting and five Great White Egrets to roost over by the reservoir. As dusk fell several large Starling murmerations fizzed inland, while hundreds of feral swans and geese flew to roost.
Posted by Paul Trodd at 11:42