Nothing much to report

Lade - mild, wet and windy, s2 - The past few days have been pretty much of a muchness, apart from a weather change today with rain returning and the temperature rising. We flogged around the local patch for little reward apart from Goldeneye amongst the wildfowl and a couple of Chiffchaffs and Goldcrests around the ponds. The bay at low tide from Littlestone continues to be productive with hundreds of Knot still present and at least nine Black-tailed Godwits, which are on the scarce side here.
Elsewhere, trips to the point have delivered small numbers of seabirds despite the onshore winds and variable numbers of gulls at the Patch. On the bird reserve a few Caspian Gulls have come and gone on Burrowes, while the long-staying three, Cattle Egrets and several Great Whites remain around Dengemarsh/Boulderwall. Marsh Harriers seem to be everywhere along with one or two Buzzards. Passerines remain in short supply, as testified by a walk around Tower Pits and the pines yesterday, although a small group of Bearded Tits showed well in the reedbed in front of Screen hide. 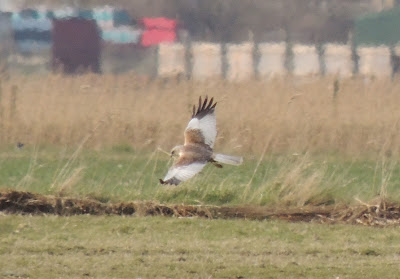