Lade - dry and sunny, NW 2 - What a difference a day makes! Yesterday`s weather was a shocker, being cold and overcast with heavy rain and sleet showers throughout, in contrast to the warm sunshine of this morning and blue skies. Our daily perambulation around the local patch took us south along the beach to Kerton Road and back along the working gravel pit to Lade where the highlight was a Dartford Warbler and Stonechat in the triangle broom, but only a handful of Pochard, Shoveler and a Great Crested Grebe on the lake. En-route we bumped into one of the regular dog-walkers who spoke of an encounter he`d had with a Short-eared Owl flushed by his dog on the desert, "one day last week". 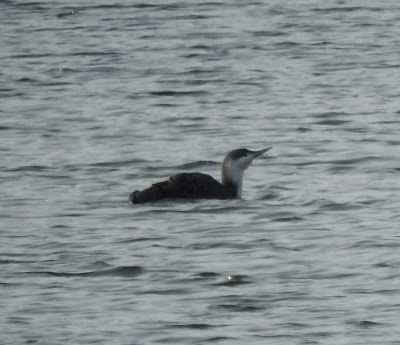 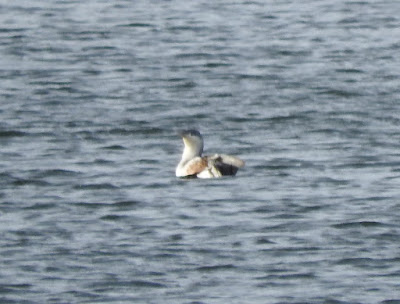 Whilst out news came through from OL concerning a pair of probable Scaup (bins views only of sleeping birds) on north lake which were soon confirmed as three (two ducks and a drake) by JY and DS, and were most likely the Scotney birds. By the time I`d called in home and picked up my scope I arrived on site to find said Scaups in flight having been flushed by walkers on the airport side of the lake; DS, however, who was quicker off the mark than I managed some decent images (see below).  A Red-throated Diver on south lake was only my fourth in 15 years and like all the others before was oiled and preening furiously. At least six Goldeneyes were noted across both waters. 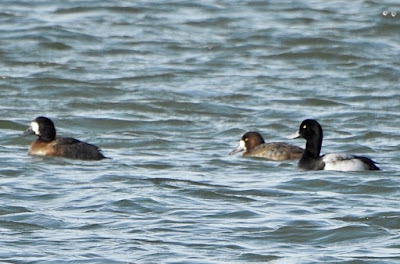 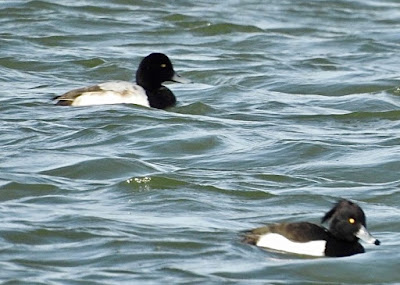 Drake Scaup with Tufted Duck for comparison (by David Scott)

Elsewhere this weekend we noted the long-staying Black-throated Diver on ARC yesterday, while our  monthly harrier roost count due to take place this afternoon on Walland Marsh was cancelled due to the current travel restrictions.