Lade - cold, overcast, light northerly - A weekend of grim, grey weather with occasional rain showers. We flogged around the local patch both mornings noting a maximum of six Goldeneyes across both waters as well as all the usual ducks, Coots and several grebes, plus Chiffchaff and Long-tailed Tits by the ponds. Yesterday evening the gull flock on north lake contained four Mediterranean Gulls. Scanning over the airport and Romney Salts produced five Marsh Harriers heading to roost, two Buzzards, a Kestrel and a flock of 20 Linnets. On Saturday afternoon at ARC the wintering Dusky Warbler showed well in lakeside scrub just north of the Screen hide alongside Chiffchaff and Firecrest, while a flock of 56 White-fronts flew overhead. 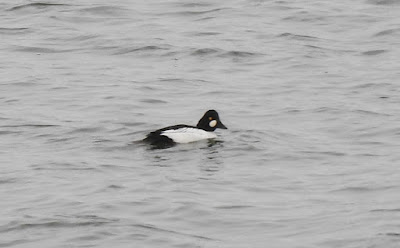 This afternoon a trip to Folkestone produced a Great Northern Diver on the sea off Sandgate and ten Mediterranean Gulls along the coastal park. On the way home a check of the sea defence blocks at Hythe for Purple Sandpipers drew a blank due people clambering over the rocks, some clutching small children which seemed senseless to me considering the risk of slippage and potential hospitalisation.