Lade - overcast, misty, light airs - A muggy day with a sea fret coming and going throughout that suppressed temperatures somewhat. A thorough look around the local patch failed to find any Cuckoos present for the second day running; although visibility was particularly poor first thing, so I`m not writing them off just yet. Pochard numbers were reduced by about a hundred with the majority on north lake amongst a few more Shoveler and Gadwall. Two female Marsh Harriers quartered the linear reedbed opposite the main track with one successfully grabbing a Mallard duckling. 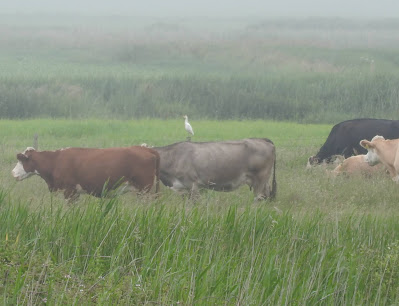 A circuit of the bird reserve in  murky light was notable for a flighty adult Cattle Egret in full breeding plumage that went from the hayfields, to the cattle herd on Dengemarsh and then onto the Boulderwall fields. At least five Great White Egrets were also noted across the site, plus the Glossy Ibis at the western end of ARC, five Teal on the hayfields and a `bubbling` Cuckoo from the ramp.