Lade - warm, dry and sunny, light airs - The sea breeze of yesterday suddenly dropped overnight allowing a decent enough catch of moths in the garden trap comprising 24 species of macros but nothing unusual. Whilst emptying the trap a flyover Grey Plover called from the bay. Sitting in the garden at 0600hrs delivered a juvenile Willow Warbler and Common Whitethroat (having probably dropped in overnight) busily snapping up insects around the pond; I often wonder what I must miss passing through our garden early on... Despite the dire warnings about water pollution I had my first very enjoyable sea swim of summer this afternoon on what was the hottest day of the year so far at 26 C - and lived to tell the tale! 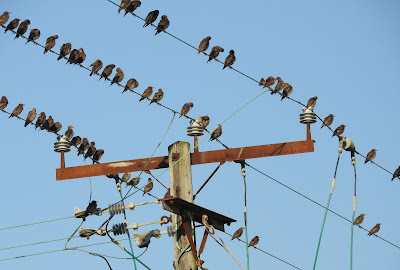 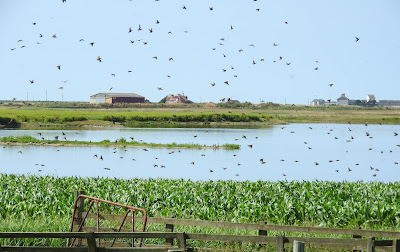 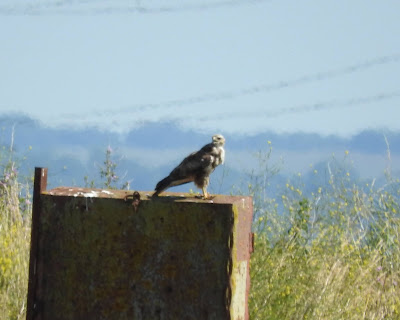 After breakfast I checked out Scotney pits in the increasing heat haze. The front pits held all the waders: four Common Sandpipers, Greenshank, Redshank and Green Sandpiper around the margins, plus 20 Lapwings, 10 Curlews, five Oystercatchers and two Whimbrels on the sheep folds amongst scores of gulls and feral geese. Outback thousands of Starlings and Black-headed Gulls hawked flying insects over the fields, where the rape-seed and barley harvest had already begun in the searing heat. Kestrel, Common Buzzard, Yellow Wagtails, Skylarks, Little Egrets and Corn Bunting all noted, plus a pulse of 50 Sand Martins south. I called in at Springfield Bridge on the way home and spent an hour watching the Marsh Harrier family over Dengemarsh. The adult male (the one with a pale rump) was easily the most efficient hunter bringing a prey item in roughly every ten minutes (probably marsh frogs), while I only saw the adult female make one delivery. As the three juveniles are well advanced the adults are eagerly greeted by grasping talons as soon as they approach the throng. More Yellow Wagtails and Corn Buntings were present in the set aside field and a party of 30 Sand Martins hurried out to sea.

The End of the Line Restaurant, Dungeness

Saturday morning we went for a stroll around the peninsula with friends and afterwards decided to breakfast in the End of the Line Restaurant at Dungeness. Oh dear, what a big mistake. A surly member of staff informed us that a cooked breakfast was unavailable despite being widely advertised on the menu. "How about some toast then, or maybe a bacon bap?", we optimistically suggested. Nope, none of them either; infact nothing that had to be cooked or anything vegetarian/vegan, apart from a small pot of over-priced strawberries. Anyhow, we opted for something that vaguely resembled a breakfast; so, said fruit, four hot drinks (dispensed in cardboard, disposable cups), a couple of dry, pre-packed sandwiches and an inedible sausage roll, all for the princely sum of £24, of which Barney had the sausages, and the birds the bread. As someone who works locally in the hospitality business I was ashamed and embarrassed for visitors from afar having to put up with this kind of rubbish service at what is, after all, a tourist hot-spot, and I have e-mailed RH&D Railway accordingly. I also checked Tripadvisor just to see whether or not our experience was a one-off; sadly it was not, there were many shocking reviews and I shall be adding this one to them. My advice to any visiting birders seeking a full English is to drive to the Oasis cafe at Old Romney where you are assured a warm welcome and a fine value-for-money breakfast.