Dungeness - cool, showery, SSW6 - 0945-1100hrs - Joined MC and CP in the hide this morning for a seawatch with a big sea being whipped up by a fast moving low pressure weather system off the Atlantic. No surprise then that the first Balearic Shearwaters of the season were recorded moving effortlessly westwards; 17 in total (MC), including six while I was there. Also noted a steady flow of Gannets, a few Sandwich and Common Terns, Fulmars, Kittiwakes, Common Scoters and my first Arctic Skua of autumn, plus several Porpoises and a Grey Seal. Thousands of Swifts were also on the move south and west across the peninsula today, along with hundreds of Sand Martins over Burrowes  and ARC pits where the strong wind forced most other birds to take shelter. However, from the access road a flock of 100 Lapwings landed on the shingle ridges with the gulls and an adult Cattle Egret flew amongst the stock on the Boulderwall fields after being flushed by a male Marsh Harrier. 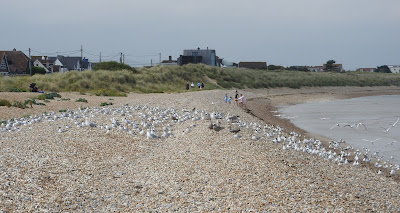 Elsewhere around Lade this week Mediterranean Gulls have been much in evidence on the bay with up to 30 birds amongst hundreds of Black-headed Gulls and a few Sandwich Terns. Small parties of adult Dunlins and Sanderlings have passed through along with single figures of Ringed Plovers and Redshanks, while the Curlew flock remains at 200 plus. Yesterday morning we checked out the Dunes Road area at Greatstone where 15 Med Gulls were by the dung heap and 10 more by the dump. Also of note was a Bullfinch, plus two White-letter Hairstreaks in a sun-trap by the railway crossing amongst elm regrowth along with a collection of Red Admirals, Painted Ladies, Hedge Browns and a Comma.

Chris Packham - The walk that made me - For someone who doesn`t watch that much telly I can honestly say that this was one of the most poignant and moving programmes I`ve ever watched, and one that will resonate with many people in these trouble times we are living through. If you`ve got a spare hour, a highly recommended watch and available on catch-up on the BBC i player.