New Romney - Saturday - mild, overcast, drizzle, light airs - A walk around the lanes and tracks north of the village first thing delivered a pair of Ravens over (new for the one mile list), 30 Blackbirds, 20 Yellowhammers, 100 Common Gulls, three Buzzards and a Great Spotted Woodpecker; there continues to be an absence of winter thrushes and Goldcrests. At Dungeness a Red-breasted Flycatcher was ringed at the Obs and a Puffin was noted moving offshore (SP). 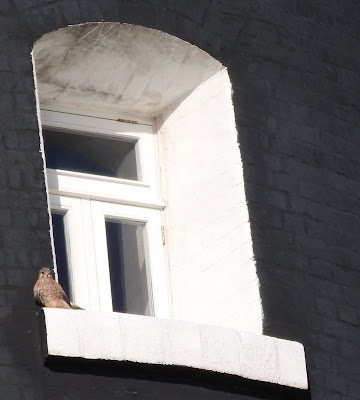 Kestrel sheltering from the wind on the old lighthouse

Dungeness - Sunday - cold, dry and sunny, N 4 - A completely different feel to the weather today with the wind picking up from the north making it decidely nippy. First stop Lade to count the wildfowl where numbers remained low and nothing much had changed since Friday. A circuit of the point, taking in the Moat, drew a predictable blank for yesterdays RBflicker and was virtually birdless apart from a Stonechat and a Sparrowhawk, plus a Kestrel hunkered down on the old lighthouse. A cursory look at the sea produced plenty of Gannets fishing offshore and a few passing auks. On the bird reserve four Black-tailed Godwits and 10 Dunlins were amongst the Lapwings and dabbling ducks on Burrowes while several Cattle and Great Egrets were on the Boulderwall fields. Walked put to the new lookout point across New Diggings where 320 Tufted Ducks and 295 Pochards were counted

Walland Marsh - Joined CP for the monthly harrier count out on the Marsh where 16 Marsh Harriers came to roost; at one stage there was 14 milling around over the reedbed in one flock searching for a suitable drop-in point. Also noted in the area: four Buzzards, 50 Golden Plovers, a Snipe, a large Starling flock, calling Water Rail and Cetti`s Warbler. However, it was depressing to see that the rough ground around Midley drying barns, so loved by finches and buntings, has all been cleared and tidied, while the nearby lane with elm regrowth and hedgerows either side, favoured by winter thrushes, has been grubbed up and the old willows cut to ribbons. Its little wonder that any farmland birds can survive in such a hostile environment.