Dungeness - mild, cloudy, SSW 4 - Started off this morning on the beach at Lade with ten Sandwich Terns on the sands along with hundreds of gulls, Curlews and Oystercatchers. A long since dead Grey Seal corpse washed up on the strandline attracted a couple of Carrion Crows, but no Ivory Gull! 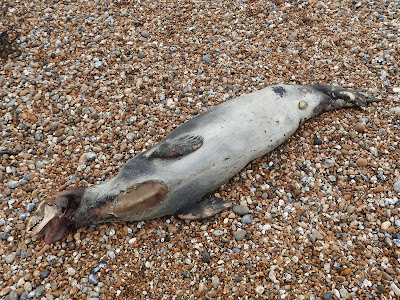 At the point a brief seawatch from the hide produced the expected Gannets, Kittiwakes and auks, plus a couple of Red-throated Divers and Sandwich Terns. The land was devoid of birds with still no sign of any Goldcrests. It wasn`t much more inspiring on the bird reserve either where the stiff breeze rendered the Firth/Makepeace end of Burrowes virtually unwatchable, although a Black-necked Grebe and four Snipe were noted. Elsewhere it was a case of the usual egrets, plus a Water Pipit on the hayfields (OL).