Dungeness - 0845hrs - mild, cloudy, ssw3 - Was good to get out and about across the Marsh, having spent yesterday driving around the M25. Anyhow, a seawatch from the hide with a brisk onshore wind delivered a steady flow of close Gannets, Kittiwakes and auks, plus a few divers and 3 Common Scoters. At The Patch an adult Med Gull was on the beach amongst the Black-heads.
The 3rd winter Glaucous Gull was on patrol by the boats, with an adult Yellow-legged on the beach.
Called in at the Kerton Road Cafe where the moth trap was being checked, resulting in 9 species including migrant Gem and Pearly Underwing. Driving across the Desert a brown Merlin flew low over the storm beaches. 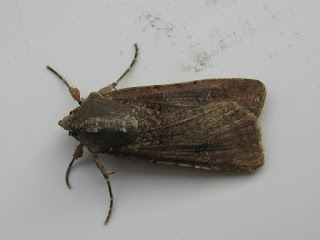 Lade - The juv Long-tailed Duck was still on north pit, but tucked away in the corner by the swing bridge to the `mirrors`. A Black Redstart was on the small dish, while Buzzard and Marsh Harrier hunted on the fields behind. Water Rail, Chiffchaff, Cetti`s Warbler and Goldcrest all called from the willow swamp. Whilst scanning the ducks on south pits a late Swallow whipped through heading south.
RSPB - Nothing much of note on Burrowes apart from a few Pintails and a fly over Great White Egret, but a redhead Smew had been reported earlier. From Hanson very few wildfowl, although 3 Goldeneyes, Kingfisher, Chiffchaff and Water Rail noted, plus 2 more Great White Egrets, a fly over Bittern and 2 Marsh Harriers from Springfield Bridge.
ps: Other local news concerned the 2 Whooper Swans at Midley and a report of a Common Crane (per MM) at Scotney, plus a Black Swan and all the usual feral geese
Posted by Paul Trodd at 11:02