Dungeness - 0830hrs - Mild, cloudy, w 2 - The day started mercifully dry and with little wind, however that all changed around noon as showers set in and the wind swung round to a chilly northerly. Wandered down to the Patch where very little of note apart from the expected Black-backs and Bhgulls over the boil. Offshore a few distant Kittiwakes, Gannets and auks, plus a steady flow of Red-throated Divers both ways; a Great Northern was noted on the sea by PB at 0930hrs. The Glaucous and Yellow-legged Gulls were on the shingle by the fishing boats. Few passerines of note apart from Pied Wagtails and Greenfinches. 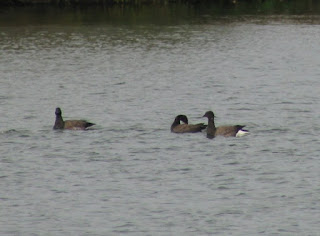 Lade - At least 4 Marsh Harriers hunting behind the `mirrors`; no doubt taking advantage of the weather conditions. On north pit 3 Brents briefly dropped in and the Long-tailed Duck remained on station at the swing bridge end.
Posted by Paul Trodd at 11:15