Lade - 0830hrs - Overcast, misty, occasional drizzle, se2 - I donned the welly boots this morning and waded into the willow swamp in search of passerines, but all I could muster up were 5 Goldcrests and a Chiffchaff in the canopy, plus 2 Cetti`s and 2 Water Rails down below. Elsewhere around the site small numbers of grounded Blackbirds, Song Thrushes and Redwings noted along with singles of Greater and Green peckers, Kestrel and Sparrowhawk. Every patch of scrub seemed to have a Wren in it, so maybe they too were migrants. The usual wildfowl on the pits including 2 Goldeneyes, plus a flock of 5 flyover Shelducks and 2 Snipe. 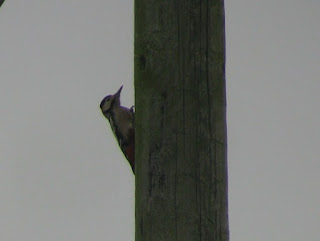 
The new Patch Hide, plus 3 dodgy looking geezers... (especially the one with the moustache!)

Dungeness - Yesterdays Pallas`s Warbler and Firecrest remained in the Old Lighthouse garden but were nowhere near as obliging today, much to the frustration of a steady flow of birders (TG had another PW in the Trapping Area this morning). Wandered over to the Obs noting a few Goldcrests, Blackbirds and Song Thrushes along the way, plus more Wrens, 15 Greenfinches, a Brambling and 12 Goldfinches. It was then onto the new Patch hide with OL, PB, & TG where we met representatives from the power station for a few piccies in the hide for publicity purposes. Nothing much on the sea apart from a passing Gannet and Red-throated Diver, although the viz was terrible. At the boats the Glaucous and Yellow-legged Gulls were still present.
Dengemarsh Gully - Very little here apart from more Wrens and Goldcrests, a few Song Thrushes and Redwings plus singles of Merlin and Little Egret.
ARC - Whilst chatting to a couple of birders in the car park a flock of 7 White-fronts flew over heading east and were my first of the autumn. More `crests and Chiffs on the walk to the pines where a Great White Egret flew over in the gloom.
Lade - Finished up back at the local patch for roosting birds. Magpies reached 25 in number and a couple of hundred Starlings came in, plus 50 Woodpigeons and 2 Little Egrets. The Long-tailed Duck reappeared for the first time this week in the gully by the swing bridge and in fading light 2 Marsh Harriers headed towards roost sites on the bird reserve.
In summary, a tidy days birding in typical murky November type weather.
Posted by Paul Trodd at 11:42