Lade - 0800hrs - Mild, sunshine and showers, w 5 - Another stormy night with gale force winds lashing the peninsula, and finally putting paid to the garden fence and summer house roof. The strong wind continued throughout the day along with some hefty showers.
All the usual wildfowl including 2 Goldeneyes and a Long-tailed Duck on north pit. Despite the wind 3 Marsh Harriers were already hunting over the farmland near the airfield. Two Little Egrets and a Kingfisher also noted.
RSPB Reserve - 1030hrs - Crossing the causeway road 6 Little and 2 Great White Egrets noted on New Diggings, plus 200 Lapwings, 2 Goldeneyes and a Pintail on ARC. Led a walk for RSPB and 12 beginners during which we concentrated on wildfowl on Burrowes, of which there were large numbers of Coot, Wigeon, Shoveler, Mallard, Teal, Tufted Duck and Pochard, plus odds and ends of Great Crested Grebe, Shelduck, Moorhen, Grey Heron, Little Egret and Grey Lag. At least 6 Marsh Harriers were noted over the Oppen Pits battling against the wind and rain; I guess they`d had a tough day yesterday in the constant rain and were desperate for food. The only little `uns we had was a flock of Long-tailed Tits in front of Firth hide, several Goldcrests and Robins in the nearby willows and 5 Linnets over Scott hide. 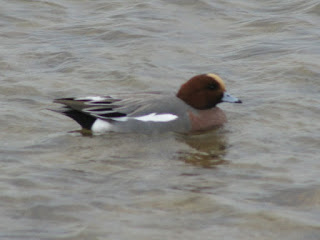