Lade - 0900hrs - Cold, cloudy, n 4 - A nippy morning with a brisk wind out of the north. Plenty of birds about though, including good views of 2 Kingfishers perched in brambles in the shelter of the willows. A passerine flock held several Goldcrests, Long-tailed Tits and a Chiffchaff. Two Cetti`s Warblers also seen nearby and at least 4 Water Rails calling. On the pits an influx of Pochards with at least 200 on north pith where the Long-tailed Duck remained.
The skies above the farmland towards the airport was full of birds, thanks to a marauding Peregrine, mainly Lapwings, Woodpigeons, Stock Doves and Starlings. Also, 3 Marsh Harriers and a Kestrel. 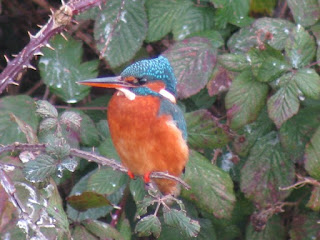 New Romney - On the outskirts of town around midday I heard the distinctive `kee-wick` call of a Tawny Owl from a clump of trees. Quickly grabbing the bins I located it atop a poplar being mobbed by 2 crows and a Magpie. Needless to say it didn`t stay put for long and soon flew off to the north. This was my first ever sighting of a Tawny Owl on the Marsh; a classic time of year for juvs being `moved on` from their natal woodlands by the adults.
Scotney - A massive flock, several thousand strong, of Golden Plovers, Lapwings and Starlings on the wet fields, plus scores of Wigeon, Teal and the flock of feral Barnacles.
Lade - Finished off at the aerial mound for roosting birds in the willows, where the highlight was 35 Magpies, plus 50 Woodpigeons and 3 Little Egrets.