Dungeness - 0845hrs - Mild, cloudy, mainly dry, ssw5 - Joined PB at the fishing boats for a brief seawatch with a blustery onshore wind bringing plenty of seabirds close to shore. Large numbers of Guillemots and Great Crested Grebes were on the water along with a scattering of Red-throated Divers. More auks passed around the point, plus a steady flow of Gannets and mainly Kittiwakes. Six Common Scoters moved west as did a cracking close drake Red-breasted Merganser.
The Glaucous Gull was on patrol along the beach and the adult Yellow-legged Gull was roosting amongst the Herring Gulls. A 3rd winter Caspian Gull was reported from The Patch.
St Mary`s Bay - 1400hrs - Managed to find the 2 Snow Buntings on the beach easily enough, but trying to digi-scope them was another matter, what with the wind and fading light, so all I got was a couple of dreadful record shots. Fascinating watching them delicately stripping dead grass seeds from the stems. 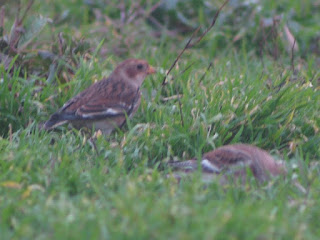 Scotney - In the gloom just managed to see the female/immature Scaup at the Sussex end of the pit found earlier by OL; Scaups having become something of a scarcity over recent winters at a site that formerly was noted for them. All the usual feral wildfowl around including Bar-head Goose and Black Swan, plus 100 Goldies on the grass fields beside the lake at the Kent end. OL also reported the Common Crane and 2 Whooper Swans at Midley this afternoon.
Posted by Paul Trodd at 09:03