Pigwell Pit - 1100hrs - Mild, overcast, light airs - Checked out the washout pit at Pigwell this morning and the nearby fishing lake both of which were devoid of wildfowl. The sewage works did however deliver 2 Grey Wagtails, which are never easy to see down here, plus 10 Pied Wagtails, 3 Mipits and a Stonechat. A stubble field was full of corvids, Woodpigeons and Stock Doves and a flyover Common Buzzard received the full treatment from the Herring Gulls.
Scotney - A thorough search of all Crane friendly fields drew a blank but did see 3 Marsh Harriers and a `ringtail` on the Sussex side, plus loads more corvids, gulls, Lapwings and Starlings in the fields. The flooded fields beside the pit at the Kent end was also full of birds with rough counts of 500 Goldies, 300 Lapwings, 200 Wigeons, 200 Starlings and a scattering of Dunlins, Redshanks and Curlews.
Greatstone Beach - 1530hrs - As always a marvellous spectacle with the waders and gulls streaming back onto the sands to feed: 550 Oystercatchers, 150 Sanderlings, 100 Dunlins, 25 Barwits, 15 Grey Plovers, 10 Knots and 5 Redshanks. Of the gulls at least 200 Common Gulls was a notable count. 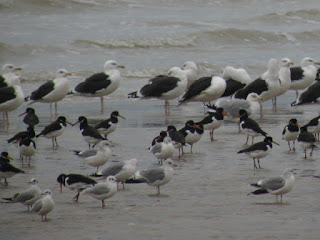 ps: Elsewhere today a Snow Bunting was seen on the beach at Littlestone (PB), while Pallas`s Warbler, Glaucous Gull and Little Auk were reported from Dungeness.
Posted by Paul Trodd at 09:02