Lade - warm, sunny, SW 6 - Following on from the stifling heat of Friday it felt good to wake up this morning to the smell of a salty, old fresh wind blowing off the Atlantic Ocean, as a cold front moved up-Channel. The temperature plummeted by ten degrees making a circuit of the local patch far more agreeable for both dog and human.
I timed our walk to coincide with the Curlews flying in off the bay to roost on the storm ridges near south lake, a couple of hours before high tide. They take about 30 minutes from the early birds to the late stragglers and this morning there was 233, most of whom came in on a low trajectory due to the strong wind, with some pausing for a fresh water bathe and drink, so I had to be alert to count `em all in, along with a Whimbrel and six Barwits. As similar numbers have been here all summer I assume that most are non-breeding birds; all showed signs of wing moult on their inner flight feathers. 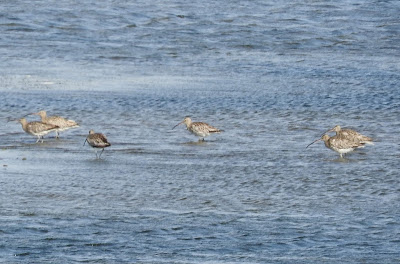 Waders are my favourite bird family by a long chalk and they don't come much more impressive than the Curlew, the largest of the tribe. Apparently, they`re in trouble across the British Isles and have now been Red Listed; numbers are declining as their traditional breeding grounds become over-grazed, intensively farmed for silage or turned into pine forests. Until 2012 they were still on the wild game bird hit list in Britain, but are still hunted on the near continent, which is totally unacceptable.
Dungeness - An hour at the fishing boats this afternoon in windy conditions produced very little apart from a trickle of terns and Gannets, 20 Mediterranean Gulls and 50 outward bound Swifts. A Grey Seal was noted just offshore.
The only other news today concerned a passage of 30 Curlew Sandpipers through ARC this morning and a Balearic Shearwater off the point around noon.
Posted by Paul Trodd at 09:26