Lade - humid, overcast, light rain - We had our first rainfall for about six weeks this morning, not much but just enough to keep the dust down. South lake was covered in wildfowl and grebes feeding amongst the floating rafts of flowering Canadian pond weed. Several Common Terns fished the open waters and a steady progression of noisy Sandwich Terns over flew the site heading towards the bay. Two Whimbrels went through high calling and a Common Sandpiper flitted over north lake where the autumns first Great White Egret was noted. 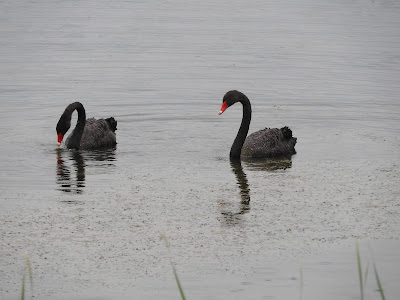 ARC - From Hanson hide a similar picture to yesterday with three adult Little Stints the highlight (although they did appear to fly off high at about 10.30hrs), an elusive Wood Sandpiper, Blackwit, Redshank, Common Sandpipers, Greenshank and Dunlin, one of which was a large juvenile. Also present hundreds of eclipse ducks, Coots, grebes, swans, geese and gulls on the lake, plus a Garganey several pulses of Sand Martins through and a Yellow Wagtail over.
Posted by Paul Trodd at 10:39