Lade/Dungeness - warm, dry and sunny, SW4 - With the wind swinging around to a more normal Atlantic airflow and picking up through the day, there was a much fresher feel than yesterday. The Patch first thing was fairly quiet with just a few Common Terns amongst 100 common gulls, while offshore a party of 15 Common Scoters flew east. A Peregrine put in an appearance over the power station setting off the Herring Gulls and a juvenile Black Redstart was noted atop the wall, plus a Hummingbird Hawkmoth basking on the wall. 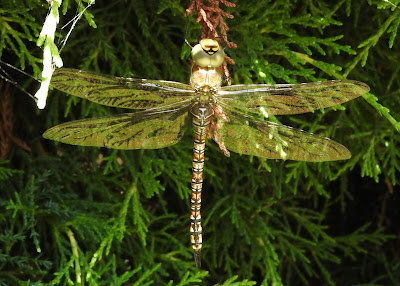 
At Lade ponds several Migrant Hawker dragonflies were on the wing with more seen in the garden throughout the day; also noted at the ponds Emperor Dragonfly, Black-tailed Skimmer and Common Darter.
ARC/Burrowes - An evening visit delivered a host of wildfowl and gulls on both lakes, including several Mediterranean Gulls and a Garganey. Waders included Wood Sandpiper on Burrowes, Blackwit, Ruff and Greenshank on ARC, plus a scattering of Little Ringed and Ringed Plovers, Common Sandpiper and Dunlin on both. Also noted a Bittern flying over Tower Pits and two Marsh Harriers at Boulderwall, plus several parties of Sand Martins through.
Posted by Paul Trodd at 12:08