Pas-de-Calais - 0700hrs - cool, sunshine and showers, nw4 - With a north-westerly wind forecast spent the day over-the-water seawatching with Weekend Birder at the helm (many thanks for steering), Marshman as navigating officer and Plodding Birder as lookout. Things got off to a bad start with a ferry delay but as dawn broke this did enable a short seawatch from deck which included: 6 Sooty Shearwaters, 4 Bonxies, 2 Manx and singles of Red-throated Diver and Arctic Skua. At Le Clipon we were unable to access the jetty due to road works; so, we initiated Plan B...
Cap Griz-nez - 0900-1400hrs - By the time we arrived the Frenchies had taken the prime pitch lower on the cliffs, so we settled down nearby. However, over the next 5 hours we enjoyed a cracking seawatch in terrific light with many birds just beneath us. The skuas were the highlights, closely followed by a decent show of shearwaters and divers. Our combined count was as follows: Bonxie 171, Arctic Skua 71, Pomarine Skua 13 (all adults, some with full `spoons`), Long-tailed Skua 9 (including 2 sub-adults), Balearic Shearwater 32, Manx 29, Sooty Shearwater 22, Red-throated Diver 9, Black-throated Diver 5 (2 in full summer plum), Common Scoter 725, Little Gull 31, Kitts 55, auks 500, Commic Terns 200, Sandwich Tern 150, Gannet 1,000, Razorbill 8, Dunlin 8, Teal 7, Shelduck 12, Med Gull 30, Grey Plover 2, plus singles of Brent and Black Tern, Harbour Porpoise and Grey Seal. Passerines included a few Mipits, Siskins and Grey Wagtails
Afterwards we called in at several sites back towards Calais along the coast noting more Med Gulls, 50 Mipits, Goldcrests, Chiffchaffs, Lottis, Wheatears, 2 Buzzards, 5 Kestrels, Marsh and Hen Harriers and Merlin.
On the return trip across the Channel infading light and a cloud burst we clocked up 18 Bonxies, 6 Arctic Skuas, Little Gulls, Commic and Sandwich Terns, Shag and a Leache`s Petrel.
In summary a fantastic days birding with my personal favourite a toss up between a close juv Long-tailed Skua and an adult Black-throated Diver (check out PB`s blog for piccies). 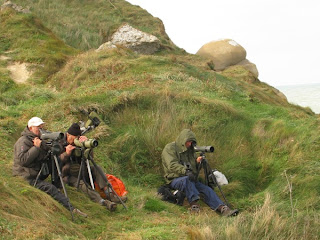 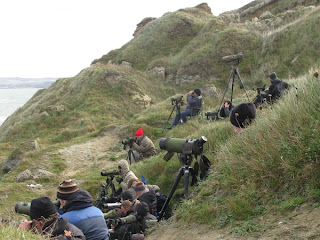 Seawatchers, Cap Griz-nez - English contingent above, Frenchies below.
Posted by Paul Trodd at 14:22