Dungeness - 1200hrs - mild, sunny, sw4 - Checked in at Hanson hide where 10 each of Snipe and Lapwing were the only waders. An increase in Wigeon, Shoveler and Teal, plus the now `resident` Goosander (asleep, as usual) and a Hobby over. Also, 3 Marsh Harriers, 5 Little Egrets and a close Cetti`s Warbler by the hide. The Pectoral Sandpiper and Great White Egret were reported from Dengemarsh.
Dungeness Moths - Very little of note in the Plovers traps last night apart from the first Clancy`s of the season. Called in at the Kerton Road Cafe to admire recent catches which included migrant Gem, Vestal and Scarce Bordered Straw. Pick of the immigrants, however was at the Obs where a Crimson Speckled (what a stunner) was well worth the short `twitch`, being only the 5th Dungeness record.
Whilst at the Obs we watched a spectacular fire over towards Galloways. 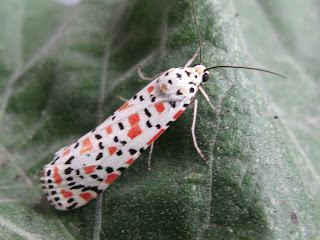 Crimson Speckled, DBO - An immigrant from southern Europe and one of the best moths of the year. 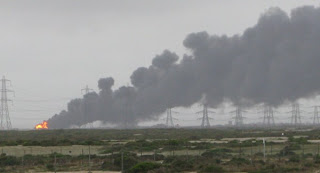