Lade - 0745hrs - cool, sunny, nw2 - First frost of the autumn made for a nippy start to an otherwise bright, sunny day. From the aerial mound a steady flow of Redpolls, Siskins, Goldfinches, Mipits, Skylarks and a single Brambling.
Dungeness - 0900hrs - Joined the viz mig regulars on the concrete road where more of the same finch wise; earlier they`d had Snow Bunting and Short-eared Owl. Good views of yet another Merlin and a Woodcock dropped in to the scrub by the Sanctuary. Offshore up to 50 fishing Gannets, a Med Gull and several groups of down-Channel Brents totalling around 50 birds. The Glaucous Gull was by the boats, `mugging` a Herring Gull for fish scraps.
ARC - A couple of attempts this afternoon for the Penduline Tit drew a blank although it was seen well on several occasions from Hanson hide. Of much greater rarity for Dunge was the report of a Lesser pecker that flew from the car park (and over my head apparently!) and disappeared into the Willow Trail scrub. All I could find were several Goldcrests and Chiffs amongst the tits and Chaffinches. There was no further report on yesterdays Dotteral amongst the Goldies. 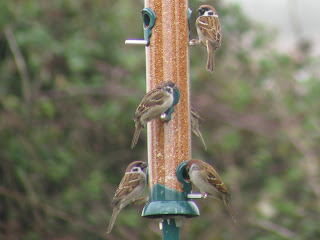