Dungeness - cool, cloudy, wnw2 - 0900hrs - Joined the Viz Mig Club on the concrete road for an hour, where the conversation was more lively than the viz mig; just a couple of Goldfinches, Redpolls and 5 Swallows over. At sea, a trickle of Gannets, a couple of divers, Kitts and a Med Gull. The Glaucous and Yellow-legged Gulls were in their usual fishing boat haunts and a smart female Merlin posed amongst the sea kale on the foreshore before being `moved on` by a Magpie. 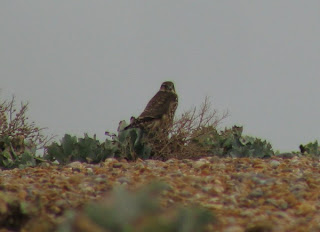 Merlin, Dungeness
ARC - 1200hrs - Fairly quiet from Hanson with only a large pack of Wigeon and Shoveler on show. Also, a couple of Lapwings and Golden Plovers, plus a Snipe, on the islands, and Long-tailed Tits and a Chiffchaff from the Willow Trail.
Dengemarsh - 1500hrs - Twelve Dunlins on the islands, Great White Egret and a large, mixed flock of Golden Plovers, Lapwings, Stock Doves and Starlings over the back fields. Raptors included 3 Marsh Harriers and another Merlin, this time chasing Linnets over the hay field. On the drive home noted another Merlin by the Kerton Road Cafe.
Posted by Paul Trodd at 12:02