Dengemarsh - cool, cloudy, sw3 - 0830hrs - A distinctly cooler feel this morning and definitely more autumnal. Walked down to Dengemarsh where the Pectoral Sandpiper eventually showed in front of the hide, but on the furthest islands, while the long-staying Great White Egret was much more obliging. Also noted, Snipe, Dunlin, Kingfisher, Merlin, 4 Marsh Harriers and 2 Kestrels. At the Corral Chiffchaff, Reed Bunting and Whinchat on the Return Trail fence line.
Boulderwall - 1730hrs - A Glossy Ibis came in off the sea this afternoon and was spotted by DB (who else!) as it flew over the Peninsula, and onto his burgeoning garden list in the process. It was quickly relocated on Burrowes, but as I drove down the access road to the bird reserve it flew over the car and  appeared to drop down on the wet meadows at Boulderwall. 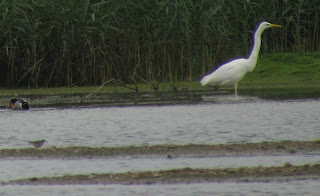 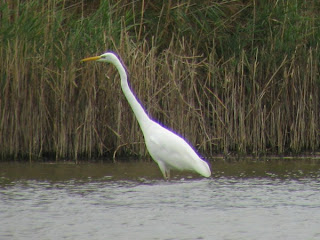