A Great Day to be at Dunge

DBO - 0900hrs - mild, cloudy, drizzle, ne2- We were just about to clear the moth traps when a phone call came through that necessitated a rapid change of plan... A cracking Yellow-browed Warbler had just been trapped and we got there just in time before it was released into the Moat. As always a real stunner and coincided with many others recorded down the east coast today. From the Moat plenty of viz mig on the go with small numbers of Fieldfares, Redwings, Blackbirds and Song Thrushes overhead. Out across the Desert 3 distant Ring Ouzels and one very showy male that the group saw at close range. A number of Mipits, Swallows, Linnets, Goldfinches, Redpolls, Chaffinches, Crossbills, Siskins, Bramblings, Grey Wagtail and Skylarks were all on the move. The Moat was full of Robins, Chiffchaffs, 10 Redwings, 2 Ring Ouzels, 2 Song Thrushes, 5 Blackbirds and at least one Black Redstart. A Merlin hacked over south and a high `eared` owl was reported. The ringing staff were busy and with birders coming and going it was like the Good-ol-Days at a bird observatory.
Had a brief look at the sea where Med Gull, 12 Wigeons, 12 Brents, 10 Sandwich Terns and a few Gannets noted.
ARC - 1230hrs - From Hanson we were fortunate enough to be there when the Pectoral Sandpiper flew in alongside a couple of Dunlin. Also had cracking views of a male Merlin and distant Short-eared Owl over by the water tower, plus Common Sandpiper, single Knot and 20 Golden Plovers.
Dengemarsh - 1330hrs From the hide we again had the Pec Sandpiper, plus 12 Dunlins, 1 Ringed Plover, 1 Pintail and all the usual wildfowl, harriers and Lapwings. Good views of Tree Sparrows on the Boulderwall feeders, plus Wheatear and 3 Stonechats at the Corral.
Walland Marsh - 1630hrs - A run out onto the farmland, with a setting sun, delivered the spectacle of a couple of thousand Lapwings, Golden Plovers and Starlings, 10 Marsh Harriers, Buzzard and Kestrel. 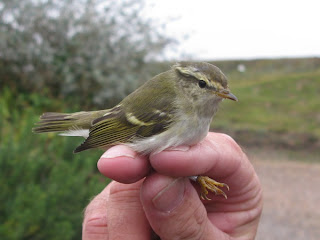 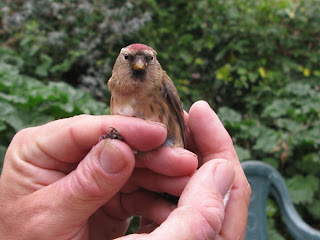