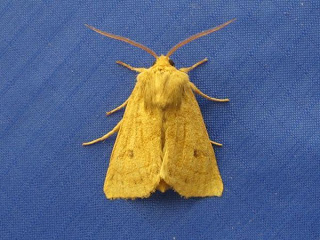 Marsh Mallow Moth, RSPB
Belated moth news from yesterday concerned a Marsh Mallow Moth trapped on the bird reserve, and now in temporary residence at the Kerton Road Cafe. This Red Data Book species is restricted to a small number of breeding sites across Walland Marsh and the Rye area where the larval food plant of Marsh-Mallow grows; this is the 15th Dungeness record. There is another population in north Kent.
Also noteworthy was the localised, Plain Wave trapped in New Romney recently on what was an extreme date, as the flight season normally last from late June to early August. Plain Wave is very similar to Riband Wave and could easily be overlooked.
The record breaking temperatures for October continued across the Dungeness Peninsula making for a very quiet bird day...
Posted by Paul Trodd at 10:56