Dungeness - 0900hrs - cool, sunny, se3 - After yesterdays excitement it was a return to more normal fare around the Peninsula. Almost all of the thrushes, Chiffchaffs and Robins had departed overnight leaving an erratic passage of Goldfinches (probably 300 in two hours), plus a few Siskins, Skylarks, Mipits, Bramblings and Crossbills. From the Moat we watched the Raven pair giving a crow a hard time and a Sparrowhawk over the power station. From the boats the sea was quiet with just a trickle of distant Gannets, auks, terns, Kittiwakes, plus several flocks of Common Scoters, Wigeons and Brents in an hour. Managed to nail down a Yellow-legged Gull at last for the trip list while the Glaucous Gull was noted patrolling its usual patch. A Purple Sandpiper was seen along the shoreline during late morning.
Lade Bay - 1130hrs - We finished the week in fine style from the Lade boardwalk with the spectacle of the beach waders coming off the bay, on a rising tide to roost. All ten species were present and correct, along with 20 Sandwich Terns and 20 Brents.
The London Ladies notched up 123 species during the week with the highlights being; Glaucous Gull, Yellow-browed Warbler and Ring Ouzels at DBO, Great White Egret, Pectoral Sandpiper and Short-eared Owl on the bird reserve and Buff-breasted Sandpiper at Rye Harbour.
However, its not all about numbers of species or rarities. During the course of the week we had some truly memorable spectacles (even for an old cynic like me) and often it takes visiting birders to remind me what a truly marvellous place the Romney Marsh can be. Without getting too misty eyed, the waders going to roost at Lade were superb, as its not always easy to get the timing right. The viz mig at the Obs on Thursday took some beating, as we only seem to get one or two days like that each autumn, but I`m a sucker for waders and the sight of the massed ranks of Goldies and Lapwings in the setting sun at Walland was magical (phew, pass the hanky...). 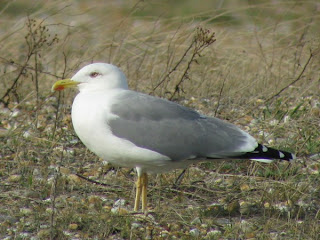 Adult Yellow-legged Gull, DBO
Hookers - 1400hrs - Having just dropped the Ladies back at Ashford Station news came through of a Little Auk on one of the pools at Hookers; which called for a diversion from the weeds at the allotment. When I arrived it was at the far side of the pool, diving continually, alongside a flock of Coots and Dabchicks. Eventually, it came much closer but proved difficult to digi-scope ( as shown by yet another duff pic below). An extraordinary record considering the weather conditions and the first Little Auk I`ve seen on the RSPB reserve. Also noted 2 Kingfishers and a Stonechat, while the Glossy Ibis was reported earlier. 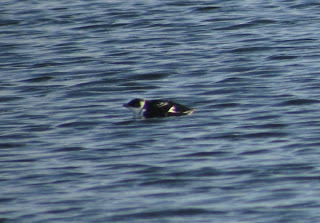