Dungeness - 0915hrs - mild, cloudy, sw3 - We returned to the fishing boats for another dose of seawatching. Only did 90 minutes as very quiet, but did see closer Gannets, Sandwich and Common Terns, 2 each of Red-throated Diver and Guillemot plus an Arctic Tern and 2 Harbour Porpoises. At least 100 each of Linnet and Goldfinch, plus 50 odd Swallows and 10 House Martins making the crossing. The Glaucous Gull was noted patrolling the boats.
RSPB - 1130hrs - Pulled up at the south end of ARC and inadvertently flushed a superb Short-eared Owl from beside the fence. It then banked and flew out across the Desert towards Lade and firmly onto my Marsh year list (228). From Hanson, waders and wildfowl included 50 Goldies, 10 Lapwing, 5 Snipe 3 Dunlin, 200 Wigeon, 100 Shoveler, 50 Teal and the first Goldeneye of the autumn. Also, Marsh Harrier, Kestrel, Sand and House Martins, 5 Tree Sparrows, Green and Great Spotted Woodpeckers. The overhead passage of Goldfinches and Linnets continued, while a flock of 2,000 Linnets was reported from Cockles Bridge.
Over the road a circuit produced a cracking Curlew Sandpiper and 3 Grey Plovers in front of Firth, 2 Pintail and a Raven on Burrowes, Great White Egret, 12 Dunlin, 5 Marsh Harrier and 2 Snipe on Dengemarsh, 2 Stonechats, Song Thrush and Mipit on the return trail. Plenty more Linnets and Goldfinches over. 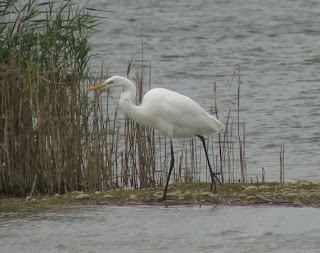 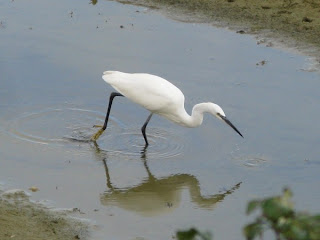