Lade - 0800hrs - warm, dry and sunny, se 2 - With light airs and a milky sun half-heartedly filtering through wispy clouds heralding favourable weather conditions for insects, there was only one place to start. Infact, I ended up spending a thoroughly enjoyable couple of hours camped along the old railway track to the south of the lakes checking out the grassland butterflies.
A riot of wild flower blooms and scent amongst the swaying grasses had enticed good numbers of fluttering Small and Large Skippers and at least two Essex Skippers. Common Blues, Meadow Browns and Small Heaths were everywhere and even one or two late first brood Small Coppers, plus Small Tortoiseshell, Red Admiral and a Painted Lady. 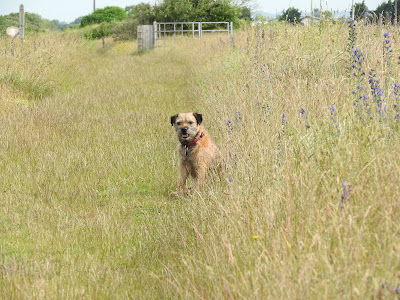 "Now its butterflies... almost as boring as seawatching..." 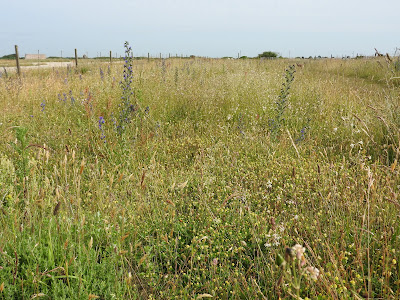 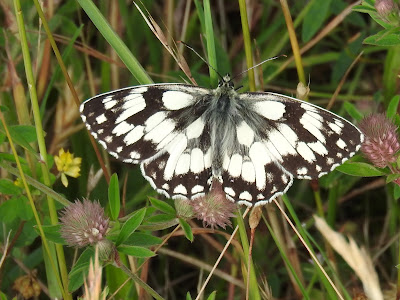 Marbled White - first of the summer 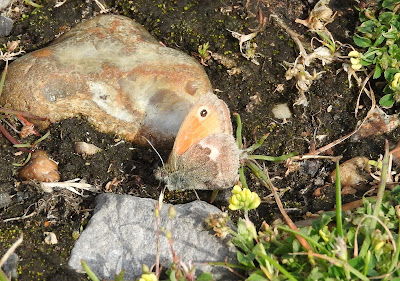 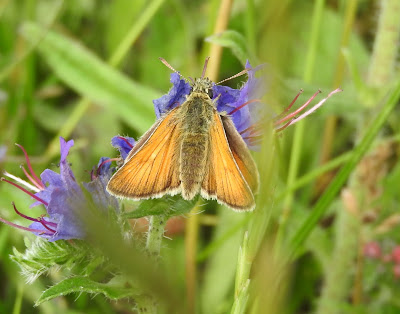 Best of all though was that prince amongst grassland butterflies the Marbled White, our first of the season with about ten in total on the wing, all in pristine nick. The one I managed to photograph was a basker, but most of the others were attracted to the blue blooms of bugloss and scabious. A lazy flapper, Marbled Whites don't appear to have any rhyme or reason to their flight pattern and quite often drift over into our garden from the shingle ridges. Once mated the females fly around randomly laying or dropping eggs at will. They are single brooded and only have a short flying season of a few weeks, so its very much a case of enjoy these black and white beauties while you can. 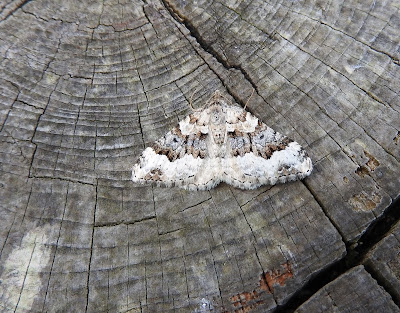 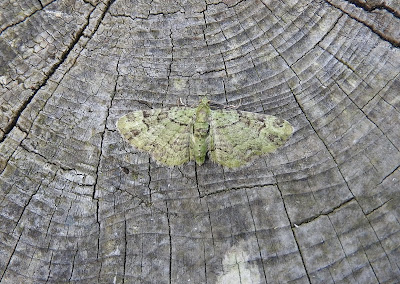 Green Pug - one of these easiest of the tribe to identify!

The moths in the garden trap were pretty decent too last night with a flurry of five species of pugs including Common and Green Pugs, new for the year, plus Galium Carpet amongst 21 species of macros.

Last week the latest Kent Bird Report hit the door mat with a mighty thump - and at 208 pages no wonder, a weighty tome indeed. In this digital age I still find it somewhat reassuring to be able to dip in and out of a `proper` paper journal, so`s it can be read at various locations around the cottage, including in the bath!
At this juncture I really should admit to being a bit of a bird report junky, and until recently had hundreds of back editions from various counties across the land. My favourites are from where we`ve previously lived and birded, so Hertfordshire, Devon, Bedfordshire and now Kent, along with Norfolk and the Isles of Scilly, two areas I`ve spent loads of birding time down the years.
However, back to the Kent Ornithological Society`s latest masterpiece. It follows the standard bird report format with the bulk of the pages devoted to the Systematic List for 2014, sandwiched between a couple of gems. Aspects of the Year by Norman McCanch I very much enjoyed, as he recounted the birding year by calendar month, preceded by a brief weather report which is often relevant to the effects it can have on our birds; eg. the south-easterly airflow in April that delivered a flock of Black-winged Stilts and a Purple Heron to Dungeness. Apparently January was the wettest since 1766 and I can still recall the high temperatures of late October while searching for migrants in shorts and T shirt.
In these days of seemingly endless grim news regarding our lowland breeding waders it was a pleasant change to read an uplifting account of The Breeding Waders in North Kent by Alan Johnson. Concentrating principally on Lapwing and Redshank chick productivity it highlighted the success RSPB and other conservation organisations are having with these declining shorebirds, as I discovered from a tour of Elmley last year with the site manager; the key to success being predator control, particularly foxes and crows. However, the majority of the North Kent marshes will only remain wader-friendly as long as landowners are compensated by EU agri-environmental schemes. Only time will tell whether or not the UK government will continue funding payments after Brexit.
And so to the Systematic List which itemises every species recorded during the year, together with relevant details such as first and last dates for migrants, wildfowl and roost counts, breeding and ringing data etc. For many of our migrants and farmland birds its a sorry old tale of terminal decline, but its not all doom and gloom as, for example, shown by the heron tribe and raptors that, on the whole, are doing rather well. Twitchers can ponder birds either ticked or dipped and there are 56 stunning full colour plates of Kent`s birds for everyone to enjoy.
Having been involved in writing bird reports for many years in Bedfordshire I know how much time and effort goes into producing such a journal, and the editorial team, list writers and everybody else involved are to be congratulated on a job well done - I`m already looking forward to the 2015 report!
Anyhow, with the rain hammering down outside, I`m off to the bath tub to glean more fascinating information about Kent`s birds (I really must get off the Romney Marsh more often) and if you haven't got a copy, check out the KOS website for details - www.kentos.org.uk 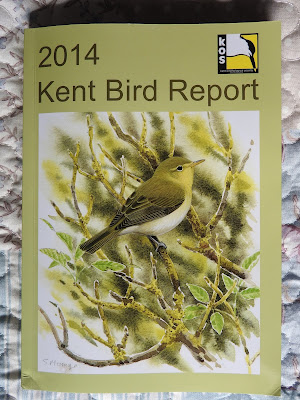