Lade - 0600hrs - warm, dry and sunny - A simply stunning morning with blue skies, high clouds and a light zephyr coming up from the south, perfect weather conditions infact for checking out the Desert and Mockmill sewer. We headed south to start with, beside the quarry, and then struck out across the shingle ridges, looping back round north along Mockmill towards the airport fields behind the `mirrors`. 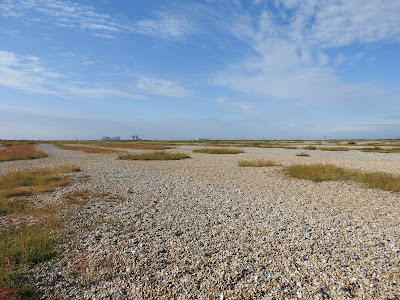 The Desert, looking south towards Dungeness

The Desert hereabouts reminds me somewhat of La Crau in the Rhone delta of southern France, but without the bustards, sandgrouse and shrikes! Never mind, you can`t have it all, and it was a delight to be serenaded by the sweet cadence of Skylarks and Mipits overhead; not to be sniffed at in these chemical-drenched times in which we live. However, the herbicide-free storm beach tops here were a riot of colour from flowering plants such as Foxglove, Viper`s Bugloss, Nottingham Catchfly and stonecrops, to name but a few. 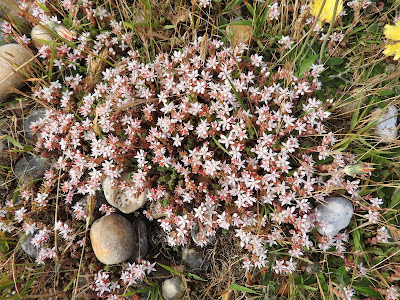 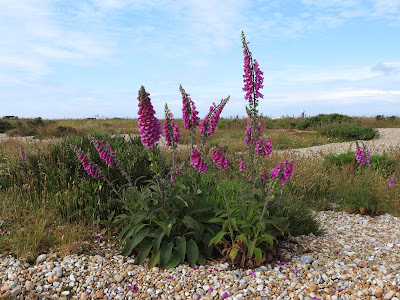 At the southern end of Mockmill where the freshwater rises from the stones lush herbaceous vegetation was the order of the day, so plenty of Ragged Robin and willow-herb amongst the juncus and nettles. Further along in the dense tangle of herbage and thorn scrub Sedge Warblers and Whitethroats were plentiful, the adults` beaks crammed full of insects for hungry youngsters calling deep within the impenetrable cover. Linnet, Reed Bunting, Wren, Blackbird, Dunnock and a pair of Stonechat were also represented along with a sharming Water Rail. 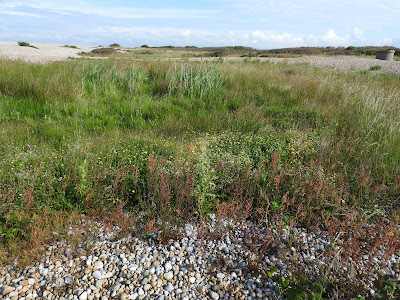 Scanning from the fence line at the edge of the Desert, looking north across rough grassland towards the airport runway, a harrowed field attracted two Hares, 21 Curlews, 10 Lapwings and a variety of corvids and gulls, while a Marsh Harrier drifted through and a Kestrel hovered in the distance. More Skylarks and Mipits were in fine voice here too.
The reedbeds and sallows on the margin of south lake were full of chugging Reed Warblers and the explosive song of Cetti`s, plus several Cuckoos going about their devious business. As the morning wore on more more damsels and dragons appeared on the wing and as we walked back for a late breakfast plenty of Common Blues, Small Heaths and our first Meadow Brown of the summer fluttered amongst the long grass. 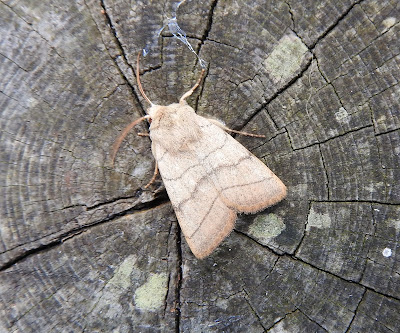 In the garden moth trap Small Square-spot and Treble Lines were the only NFY species of macros.
Posted by Paul Trodd at 11:22