Scotney - 0730hrs - cool, cloudy, sw 4-5 - A blustery morning at Scotney commenced with 25 Curlews and our first Green Sandpiper of the `autumn` on the front pits, along with a Wigeon, five Egyptian Geese and about a thousand Greylag Geese. The Little Owl was on its favoured barn in the yard while the usual Yellow Wagtails, Skylarks and Corn Bunting were either seen or heard on the farmland. The back pits yielded a few Avocets and Black-headed Gulls with fledged chicks, but only a couple of pairs of Common Terns still remained on the breeding island.
At the Sussex end the Spoonbill flew over before eventually settling down amongst the geese and a Cuckoo could be heard singing on the ranges. Later on the Spoonbill moved to the eastern end of the pit by the farm. 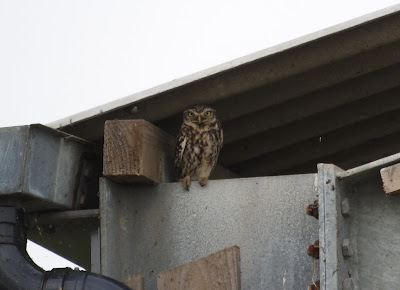 RSPB - Along the access track, Hobby, Cuckoo and Kestrel noted, plus a Brown Hare and a young Fox. A quick look at Burrowes delivered eight Black-wits roosting on an island in front of the VC and small parties of Swifts over the water. 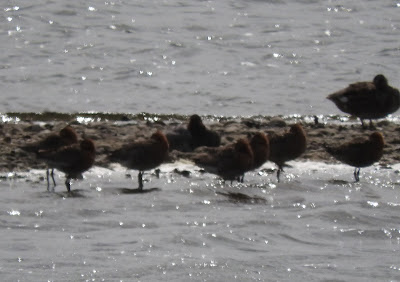 Roosting Blackwits in the glare

Dungeness - 1430-1600hrs - SW 4 drizzle - Timing is everything in seawatching and as we joined CP and MH at the boats two Manx Shearwaters clipped the point heading west; Manxies tend to be scarcer here in summer than Balearics. And that was about it really on the seabird front, apart from  30 Gannets, five Common and three Sandwich Terns and a Kittiwake for the rest of the watch.
However, there was a decent movement of coasting Swifts over sea and land, all heading south and west. PB joined the party and by the time we left over 1,000 Swifts were logged, plus another 200 on the walk back to the road.
Posted by Paul Trodd at 11:01