Lade - cool, cloudy, drizzle, brighter later, sw 2-5 - Its that time of year when the birding scene is at it flattest, which hasn't helped what with the wind picking up throughout the day. Yesterday was a decent Swift day with a couple of hundred over the lake and track hawking insects in the rain, while at least four Cuckoos were noted. A total of 18 Curlews left their roost on the shingle as the tide receded, while a few more NFY moths appeared in the garden trap, including Elephant Hawk-moth and Cabbage. 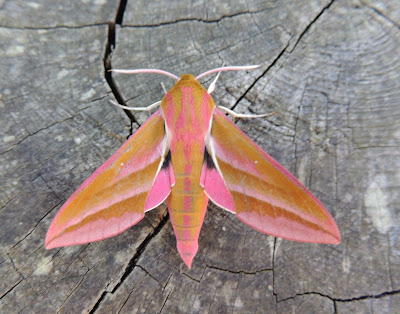 Dungeness - 0730hrs - A stroll down to the Patch yielded 100 Common Terns over the boil and the usually array of mainly immature Herring Gulls on the beach. Offshore a steady trickle of Gannets were toing and froing, a few Sandwich Terns fished along the surf, a party of Swifts coasted west dodging the rain and two porpoises were noted.
We then flogged around the Desert, Trapping Area and Long Pits with just the usual Whitethroats, Blackcaps, Chiffchaff, Cetti`s and Reed Warblers to break up the monotony; there was no sound from yesterdays Nightingale. A female Black Redstart showed on the power station fence, a Raven cronked overhead and that was about it really.
Posted by Paul Trodd at 11:33