Lade - humid, dry, cloudy, sw 4 - Overnight the wind swung around to a south-westerly vector and continued to increase throughout the day, bringing a rapid end to the `heat wave`. However, 32 species of macros were noted in the garden trap including two more Sussex Emeralds (my best ever tally at nine), Common Emerald and Grass Emerald.
At the Kerton Road Café the two moth traps produced 17 more Sussex Emeralds (almost all females) and a locally scarce Small Emerald, which was new for me. Continuing on the emerald theme we also had a very small specimen of Common Emerald, less than half the normal size. 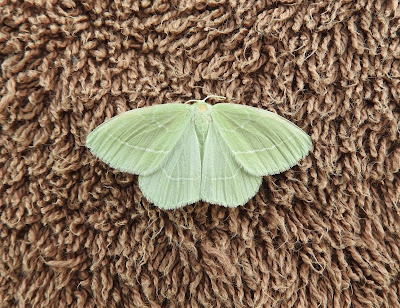 Small Emerald, a scarce resident in these parts

Dungeness - At the Patch singles of Mediterranean and Yellow-legged Gulls were amongst hundreds of moulting Black-headed and Herring Gulls, 10 Common and three Lesser-black Backed Gulls.
Scotney - Nothing much of note on the roadside pits apart from the usual plastic wildfowl, loads of Herring Gulls with juvs on the island and a Common Sandpiper over the main lake.
Dungeness - 1500-1600hrs - Hazy, sw 4 -  An afternoon seawatch from the fishing boats, in the company of MH and PB, proved to be very slow with just a trickle of Black-headed Gulls and Sandwich Terns, two Gannets and three Common Terns west, plus several pulses of Sand Martins comprising 50 birds. However, Harbour Porpoises were good value with at least six just off shore and showing well.
Posted by Paul Trodd at 08:53