Lade - 0700hrs  - warm, cloudy, showery, sw 2 - A Green Sandpiper on north lake was new this morning, while a flock of five and then a single Whimbrel went over calling. The first passage Willow Warbler of the season sang a half-hearted lament from the willow swamp as several Migrant Hawker dragonflies warmed up around the ponds. Small flocks of Sandwich Terns noisily passed across the lakes, en-route to the beach, where 60 Dunlins and 45 Sanderlings fed amongst the regular Curlews, Oystercatchers and Ringed Plovers, plus four Shelducks.
Throughout the day several more Seven-note Whistlers passed down the coast. 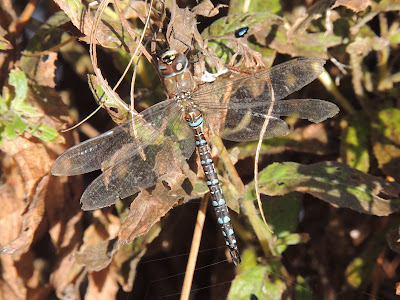 Migrant Hawker warming up by the ponds

RSPB - A check of the water level on ARC from Hanson hide revealed a couple of small exposed islands and several more suitable for standing Lapwings, Coots and gulls. The Cormorant island was difficult to view due to the reed growth in front of the hide, while two Blackwits were seen earlier from Screen hide (NB). Things were much better on Burrowes where the shingle islands attracted three each of Common Sandpiper and Dunlin, plus singles of Redshank, Little Ringed Plover and Turnstone. Hundreds of eclipse wildfowl, gulls, grebes, Common Terns, Coots and Sand Martins were present, plus a lone Barnacle Goose and two Garganey feeding in front of Firth hide. A large flock of Lapwings on the shingle from the access road contained two Golden Plovers. 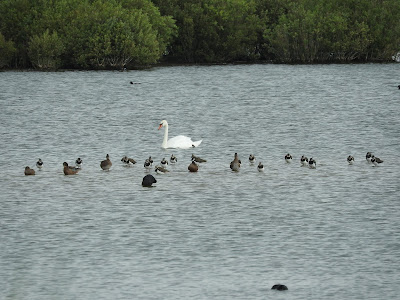 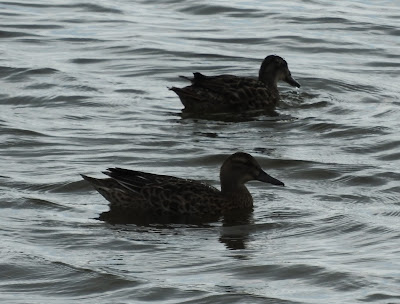 Garganeys in front of Firth hide

Dungeness - 1530 - 1645hrs - A nothing sort of a seawatch from the fishing boats for the first half hour with a handful of Gannets and Sandwich Terns feeding offshore with four Porpoises. It then livened up somewhat with 30 Common Terns, 20 Gannets, 10 Sandwich Terns, 10 Kittiwakes, Guillemot, Fulmar and a juv Yellow-legged Gull westbound.
Posted by Paul Trodd at 10:08