In search of passage Waders

Lade -0600 - 0900hrs - hot and sunny, e 1 - A stunning morning with a cobalt sky and light airs coming off the bay, and definitely a day to be out early before the heat haze takes hold. It doesn't take long without rain for the desert grasslands hereabouts to become brown and desiccated, but stoop down amongst the ground litter and a wealth of invertebrate life awaits the naturalist. Insect larvae and plant seeds, day flying moths, damselflies and butterflies, scores of species in every square yard, it was all present. I could`ve spent ages along the old railway track, but my quest was for passage waders in the Kerton Road quarry before the drag lines got going. 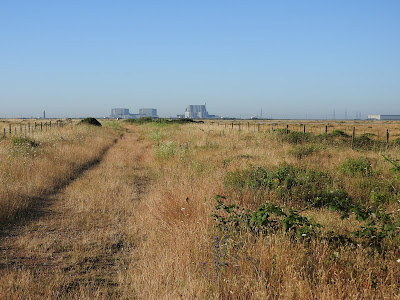 First up two Common Sandpipers flitted over the island lake on bowed wings uttering their shrill calls, followed by a trio of Redshanks on an overgrown island that only last year held a Black-headed Gull colony. On the main island a small flock of Lapwings and Oystercatchers loitered alongside another Common Sandpiper, plus a juvenile Little Ringed Plover, my first of the return passage here.
It was already hot in the gravel bowl as the quarrymen clocked on and Barney was suffering, even with his clipped coat, so we headed for some welcome respite from the sea breeze along the beach. In the shimmering air across the bay Curlews and Oystercatchers competed with bait-diggers for black lug as a squadron of Sandwich Terns noisily headed towards Dungeness. From Kerton Road to Lade boardwalk we managed a few more shorebirds: 15 Ringed Plovers, eight Dunlins, a Whimbrel (unusual on the bay) and the cherry-on-the-cake, four spanking Sanderlings still in breeding plumage and probably fresh in from their tundra breeding grounds in the high Arctic. What a marvellous sight to end our walk on. 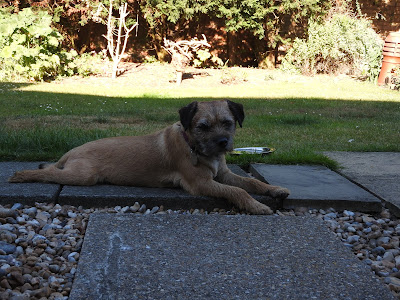 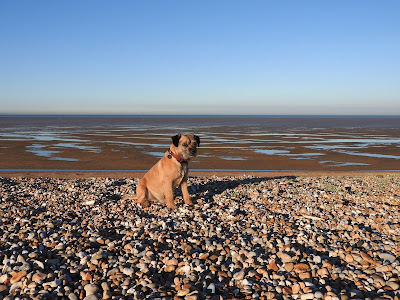 The temperature topped out at around 25C in the garden this afternoon, needless to say the hottest day of the year so far. Another check of the beach this evening, while pleasant in the cooling breeze, was hopeless for birding as people were everywhere enjoying the sunshine - and some of them looked as though they may regret it later on, judging from the colour of their skin...