Dungeness - 0730hrs - Humid, cloudy, w 2 - A change of scene this morning commenced with a half hour seawatch from the hide that yielded 30 Gannets, 10 Sandwich Terns and a westbound dark phase Arctic Skua, our first of the return passage, plus 20 Swifts out, with single Grey Seal and Porpoise in the oggin.
At the Patch the post-breeding build up of gulls continues with several recently fledged Black-headed and Herring Gulls already on the wing, plus a smart adult Med Gull amongst the massed ranks; at least three immature Herring Gulls sported red colour rings, but were too distant to read the numbers. Won`t be long now before (joy upon joy) the dreaded juvenile Yellow-legged Gulls start to appear on the beach... 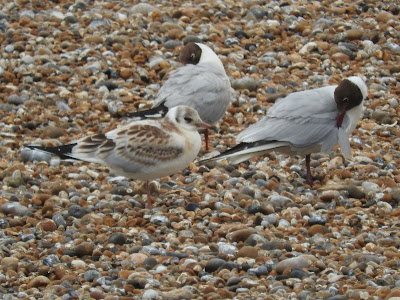 July is probably the peak month of the year for numbers of fledgling songbirds making their first tentative steps in the world, many of whom, of course, will not see their first autumn. During the past week I`ve witnessed Sparrowhawks taking House Sparrows, Starlings and Collared Doves around the garden and a Mipit over the Desert at Lade.
This morning I watched a male hawk zip low over the shingle, nip up and over the power station wall and miss a Pied Wagtail by a whisker. He then sat on the wall for 15 seconds, before spotting a family party of Linnets feeding out on the shingle ridges. It was then a case of flap-flap, glide and grab. Bingo! - breakfast. The Silent Assassin strikes again.
Posted by Paul Trodd at 12:14