Back on the beat

Lade - cool, still and cloudy - Having had a weekend of wedding celebrations with our Kate, who married Tim on Saturday at Littlehampton, it felt good to be out and about around the local patch with Barney today in fine winter weather.
This morning we did our usual circuit of the wetlands where the Red-necked Grebe was still on north lake while the Hume`s Warbler remained as elusive as ever around the ponds where it called three times confirming its presence. Also in the willow swamp area: Chiffchaff, Cetti`s Warbler, Goldcrest, Long-tailed Tit, Redwing, Kingfisher and Green Woodpecker, a Marsh Harrier over and a Dartford Warbler along the track. There was an increase in Teal and Wigeon numbers on south lake, although only two Goldeneye were noted. 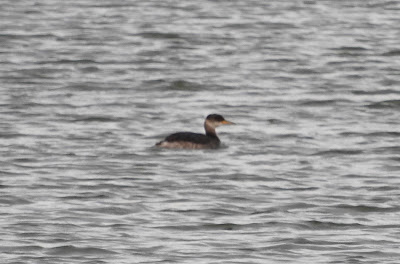