Scotney - mild, cloudy and still - I decided on a change of scene this morning, and with some success. Around the farm a small flock of finches and sparrows contained several each of Tree Sparrow and Corn Bunting, while the resident Little Owl was in its usual spot on the straw bales.
A ringtail Hen Harrier flew over the coast road heading towards the Midrips on the ranges was a welcome first for the year. Whilst scanning the front fields from the cycle track I was joined by CT. The flooded sheep folds were full of wildfowl and waders including a Spotted Redshank, three Ruffs, 10 Redshank and four Ringed Plovers amongst hundreds of Goldies, Lapwings, Curlews and Starlings. 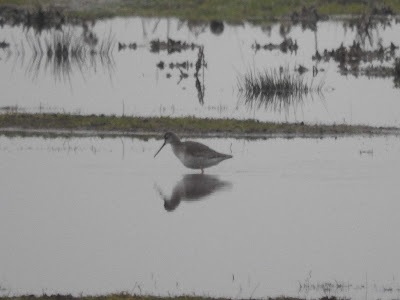 Moving back down the road towards Lydd we stopped at the entrance to the sewage works at Pigwell, where walking back along the cycle track we eventually had good flight and scope views on the deck of a smart Woodlark in a stony, weed-strewn field. Also present were three Red-legged Partridges, Stonechat, Goldfinches and Chaffinches, hundreds of corvids and a Little Egret, plus 50 Pied Wagtails and a Grey Wagtail over by the sewage works.
On the way home a drive out the back of Lydd to Horse`s Bones farm delivered a distant flock of 48 Bewick`s Swans and two more Corn Bunings on an overhead wire.
Posted by Paul Trodd at 09:06