Lade - mild, sunny, light airs - Another superb morning to be out and about in the field with the temperature rising into double figures by midday. Two Dartford Warblers showed briefly by the main track, along with a variety of passerines including three Stonechats, two Reed Buntings, Cetti`s Warbler and Song Thrush. Two redhead Goosanders dropped in on south lake for about ten minutes before flying off towards ARC, while the Red-necked Grebe remained on north lake. At the ponds the usual tit, Chiffchaff and Goldcrest flock was present but I could find no sign of the Hume`s Warbler.
From Cockles Bridge ten Bewick`s Swans were in the fields amongst the Mutes, plus two Marsh Harriers, Stonechat and Skylark. A drive out on Walland delivered three more Bewick`s in a field near Brookland, a Great White Egret and several large parties of Fieldfares. 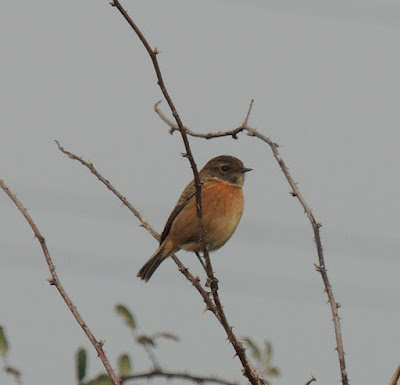