Lade - mild, dry and sunny, W2 - Following heavy overnight rain, which left plenty of standing water hereabouts (a rare sight on the shingle), the weather front soon cleared through bringing bright sunshine and blue skies in its wake. A party of five Goldeneyes dropped onto south lake included two spanking drakes, otherwise there was no change from the usual birds. 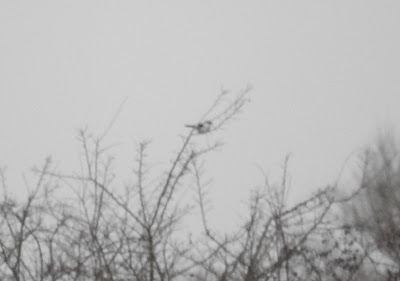 Shirley Moor - Had a run out to Moor Lane this afternoon as the wintering Great Grey Shrike had been reported again this morning. CT and GH were also on site and it wasn't long before Gill picked up the shrike atop a distant hedgerow from the green-fenced bridge. Colin soon had it in the scope and we watched it for about ten minutes in fading light before it disappeared from view.
A few years ago I surveyed Shirley Farm and it remains a model for what a wildlife friendly holding can be with stubble fields, unploughed field margins and thick, tall hedgerows. As a result winter thrushes were everywhere along with finches and buntings, including the fast-declining Yellowhammer, and best of all two Barn Owls, one of which was seen to catch a vole. If only there were a few more farms like this around...
Posted by Paul Trodd at 13:05