Dungeness - mild, dry and sunny, light airs - As a high pressure weather system moved in from the south-west it was a superb day to be out and about in the field; settled weather, at last, and it looks set to continue for a week or more. From the fishing boats a seawatch produced the expected Gannets, Red-throated Divers, Great Crested Grebes, auks and Kittiwakes, plus two Med Gulls, 10 Common Scoters and two Eiders. 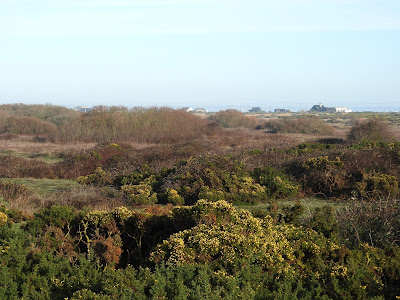 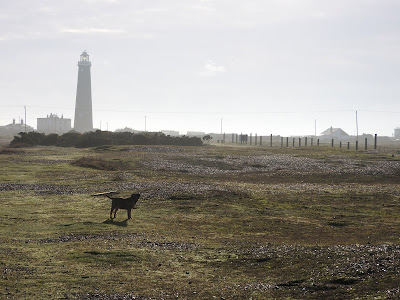 Next stop the Trapping Area and as soon as we arrived at the southern tip the distinctive call of a Siberian Chiffchaff could be heard amongst a mixed flock of tits, Goldcrests and at least two nominate race Chiffchaffs; the tristis call sounded to me like a thin, high-pitched Reed Bunting. Thankfully it called constantly which aided location, although I only had obscured views of what appeared to be a brownish Chiffchaff. Also noted two Snipe, Stonechat, Kestrel, Redwing and Green Woodpecker.
Lade - Pat joined us for a circuit of the local patch this afternoon in glorious warm sunshine. A Dartford Warbler called from scrub by the badger sett while a drake Goldeneye displayed to a harem of redheads on south lake.
It was then home to watch one of the best films of all time, It`s a Wonderful Life, my only concession to Christmas!
Posted by Paul Trodd at 11:23