Lade - mild, showery, w 3 - The weather pattern seems to have settled into one of Atlantic fronts sweeping in from the west bringing a mixture of sunshine, cloud and showers, and it looks set to continue as such into next week at least; still, at least it`s mild. Nothing much has altered on the local pits with plenty of wildfowl on south lake, including up to five Goldeneyes, while Dartford Warbler, Chiffchaff and Goldcrest are all still present. A check of the bay revealed all ten regular species of waders at low tide from Littlestone opposite the old caisson. 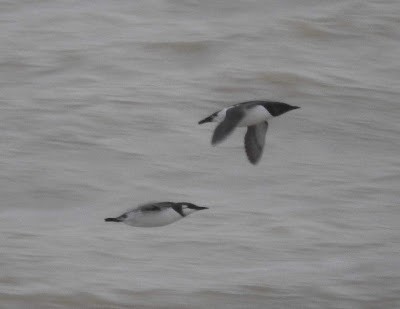 Guillemots from the fishing boats

A couple of visits to the fishing boats for a seawatch yesterday delivered good numbers of Gannets, Red-throated Divers and auks offshore, plus Mediterranean Gull and a distant Pomarine Skua. On the bird reserve the three Cattle Egrets have been going between Boulderwall fields and the horse paddocks, while a couple of Great Whites are still on site. Small parties of Bewick`s Swans can be found on the fields between Cockles Bridge and Lydd as well from the lane out towards Midley.
Posted by Paul Trodd at 10:15