Lade - cold, cloudy, NW 5 - The only difference in our two circuits of the local patch this weekend has been the weather: relatively mild and benign yesterday, in contrast to a drop in temperature overnight and a rasping wind out of the north today. A Shelduck was the only addition to six Goldeneyes and the usual wintering ducks on south lake. 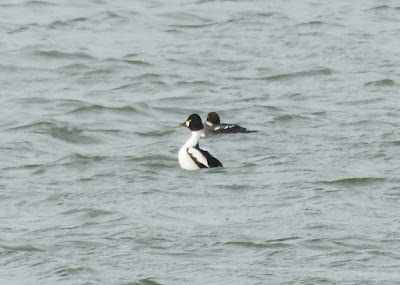 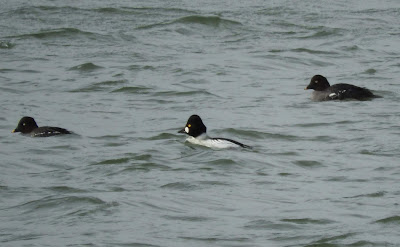 This morning I spent the regulation hour counting our garden birds for the RSPB`s annual Big Garden Birdwatch, now in its 40th season. Its pretty much idiot proof as surveys go, or so I thought! You just count the birds that land in the garden and record the highest numbers of each species present at any one time; in my case nine, with 23 House Sparrows the top count. The problem arose when a male Sparrowhawk glided through the garden, took a feint at a sparrow, missed and carried on to the next garden take-away, so technically ineligible for the tally as it hadn't landed ... Mmm, I thought, "I`m sure it brushed the fir trees on the way out". Anyhow, on the list it went rounding things up to a neat and tidy 10 species!
Whilst on the subject of recording now is the best time of year, during these long dark evenings trapped indoors, to dig out last years bird records and forward them on to the county recorder. It used to be a bit of chore in the old days of paper and record cards before the Internet, but not so now as even someone as digitally inept as myself can set up a basic system of recording which can be  updated through the year and then submitted when ready at the click of a mouse.
Bird recorders always welcome records away from well-watched sites, and don't ignore those so-called common species as change can be rapid; eg. when I first moved down here 13 years ago Marsh Tits were a given in the woods of the Orlestone Forest, and now they're finished. Try to summarise your records as some poor soul has to make sense of them and write up a species account for a Bird Report. First and last dates of migrants are always welcome, as are breeding records and rarities, some of which may require a written report.
And don't forget the many other natural history disciplines out there such as butterflies, moths, dragonflies, plants etc, all of which will have county or regional recorders eager to have your records.
Posted by Paul Trodd at 10:44